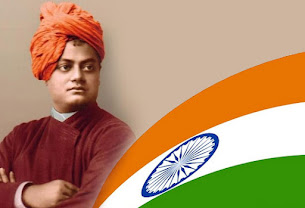 "Take up one idea. Make that one idea your life; dream of it; think of it; live on that idea. Let the brain, the body, muscles, nerves, each part of your body be full of that idea, and just leave every other idea alone. This is the way to success, and this is the way great spiritual giants are produced."

Swami Vivekananda was an Indian Hindu monk, Hindu Revivalist, Vedanta Philosopher. He's also the founder of Ramakrishna Vedanta Math. He is mainly famous for his great address at the parliament of the World's Religion in Chicago in 1893. Indian people often give him the credit for raising Hinduism as a World Heritage. His birthday is celebrated as National Youth Day all over India.

on 12th January 2022 Swami Vivekananda Jayanti was celebrated at VKZPV, Basantipur from 9:00 am to 11:00 am. It is the most significant day of our instituition.Swamiji is the one whose thoughts & values are applied to run the school. VKV is establisedto spread swamiji's message to thge whole world.The portraits of the Om kara, Swami Vivekananda, Sri Ramakrishna Paramahansa and Maa Sharada Devi were decorated with flowers and garlands.

The celebration began with a google meet with all North & Middle Andaman VKV and VKZPVs along with our valueable dignitaries Mananeeya Hanumanth Rao ji, Vice President, Vivekananda Kendra and Varsha Bujone, Secretary, VKVs Andaman. After the google meet, teachers and non teaching staffs proceed to celebrate the day. Speeches, Rashrtageet, Swadesh Mantra and Bharat Mata Aarti were performed by the teachers. Everyone participated whole heartedly and actively.